So far this experiment is going well! I am enjoying setting an intention each morning (today’s was: React out of love, not out of fear), and setting out my clothes the night before is definitely helpful. I think it saves me about two minutes (hey, every minute counts), but more importantly, it helps me to wake up less anxious and makes it easier to get out of bed (which is saying a lot!).

I love the idea of today’s task. Here is the original idea, from a post called “Five Time Management Tips That Will Change Your Life” on the blog Living Well Spending Less:

“I think for me getting rid of the things I don’t really need to be doing is probably the hardest part.  Everyone has a few time fillers they could probably eliminate from their day, whether it be baking something from scratch when it could be store-bought, spending an hour watching TV or drooling over Pinterest, or even taking on a few too many commitments.

This is where the priority list and goal setting becomes so important!  If when you look at your day, you find that much of your time is filled with things that don’t match up to your priorities or your most important goals, then something has to give.  Start small–eliminate 3-5 things in your life that are taking up time but not adding much value.  Just stop doing them.  Yes, I know it is easier said than done, but making a conscious decision paves the way for change.”
Read more here.

This is a great blog post, and one that I’ll be revisiting over the course of the 28 days.

This particular tip is difficult for me. I’m sure most of you can relate when I say that it feels like every task I do is essential – otherwise, why would I be doing it? If I’m working, I’m making money. If I’m watching TV or surfing the net, I’m enjoying leisure time. And all the household chores, and parenting tasks, well of course those are essential!

First, I looked at my To Do list. Everything on there is pretty essential. That’s why it’s there. Grocery lists, work tasks, homeschooling goals, fitness ideas – all things I want to be doing. I felt discouraged – if everything on my To Do list is crucial, what the heck am I going to cut? 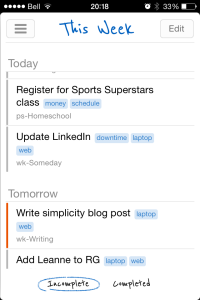 But that’s the thing. It’s not those items that I need to cut. It’s the things that aren’t on the To Do list. I’ve been working on making my To Do list better – only listing the things I really need or want to do, so that I don’t get overwhelmed, and shuffling items to a later date as soon as it becomes clear that I won’t be able to get it done by its scheduled deadline. The items on the list aren’t the problem.

What else am I doing during the day? Driving. A lot. I would love to eliminate some driving. There are at least 2-3 days each week when I spend about four hours in total driving (and guess what is my least favourite activity?), and usually at least two more days when I spend at least two hours in the car. I do try to make these times somewhat productive or relaxing by riding in the passenger seat when we take the kids to their dad’s (a two-hour round trip) or by listening to the CBC while I’m in traffic. But it doesn’t change the fact that I’m driving.

But how do I eliminate driving so much? I live in Calgary! It’s what we’re known for. Calgary’s downfall is that you have to drive everywhere, and not only that, but we have some of Canada’s worst drivers (seriously. They are terrible. I say “they” because I swear I’m a good driver. But we do have an absurdly high percentage of d-bag drivers here.). I can’t remedy the driving at this exact second; however, I can keep an eye on the amount of time I spend driving and work to cut down.

Other than driving, I would love to eliminate housework, tidying up after the kids, washing dishes and doing laundry. Obviously I can’t eliminate these things, so I plan to look into ways to cut down on each in the near future. Some of the upcoming blog posts will be about just that.

The last thing I would love to eliminate is having to go over to the other house (where I lived up until June), which Justan is holding on to for dear life because he loves it and sees it as his sanctuary, to feed the chickens and our old cat every two days. We don’t want to move the cat, Harley, because we need to have him checked out by a vet first to address his urination issue (and until then we don’t want to move him into a house with a bunch of carpet), and because we’re afraid it will be hard on him to move and we want to decide where we’ll be living in six months before moving him into this house. It’s essential for now that I keep going over to that house to keep an eye on things. Luckily, Justan will be home next week. He has been working out of town for months, only coming home for a day or two here and there, and so we have had to go over to the other house at least every other day. Once he’s back, he can start taking care of that responsibility.

All in all, I would say that I found this exercise really challenging. When you have four kids relying on you to drive them around, and feed and care for them; two houses to look after; several contract jobs; fitness goals; two partners; and a homeschooled child, finding the unessential tasks is difficult. I think the moral here is that our life is currently a lot to manage, and that teamwork is key. I do look forward to cutting back on my driving time, streamlining my household chores, and having Justan back in town so I no longer need to worry about visiting the other house several times a week.

Tomorrow, I’ll try to “Work Fast,” another set of tips from the same list that brought us “Start the Day.” After my experience with the Start the Day tips, I admit I’m skeptical. But we’ll see. Click here to see the pin.

And in case you want to check it out: the board for this series.