All day today, Neko told everyone it was her birthday… her “fake birthday.” In reality, today was the day of her birthday party, which I’d be willing to bet is more like her birthday to her, than is the day of the anniversary of her birth. Ah, well. We started off with a “Chickadee Party” with Outdoors In, a local organization that teaches classes about nature and animals. Judy, the instructor, offers a lot of neat classes on seasons, survival, habitats, adaptation and so on to homeschooled kids, and given that Neko is really into nature and science, we go to a lot of these. Today’s class was on birds and different animals and how some adapt, some hibernate and some migrate during winter.

“Mice” hiding under the “snow.”

A mouse emerging from the melting snow in the spring.

The idea was that this was the “Christmas party” to end off the fall sessions of Outdoors In, so we ended with cookies and hot chocolate. 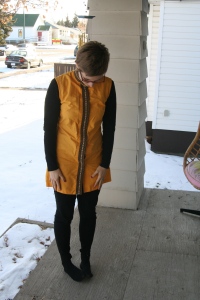 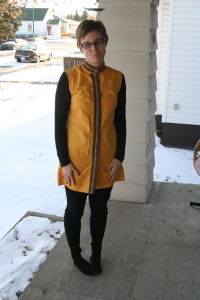 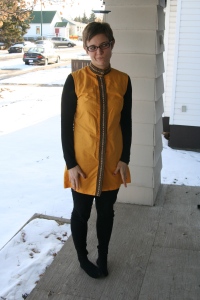 The evening was Neko’s birthday party. Neko turns six later this month, but given the proximity to Christmas, we try to have her party early. This year marks her first sleepover! We started off with Make-Your-Own-Sandwiches. The girls could choose toasted or untoasted; mayo, mustard or roasted red pepper hummus; ham or chicken; spinach, sprouts, tomatoes, pickles, onions, avocado or red pepper; herbed havarti, cheddar or emmental. 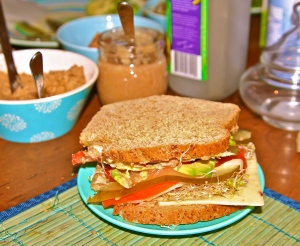 I made a photo treasure hunt, as most of the girls in attendance are just learning to read. This went over like gangbusters.

Going to the basement to find the treasure. Yes, I know how creepy our stairs look.

The treasure was Crazy Carpets! I couldn’t have guessed how well these would go over!! 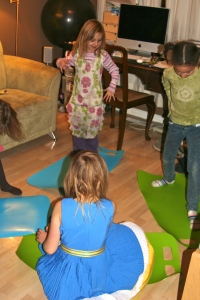 I somehow managed to not take a photo of all of them playing Just Dance 3, which was the highlight of the night, and so cute and funny to watch. This was Neko’s early birthday gift. Two of the girls went home around 9 pm, while Charlotte stayed to sleep over. While Neko and Charlotte stayed up to read/look at books until 10:30 pm, once we turned out the lights, they were asleep in minutes.

Now, Charlotte has requested I wake her at 7 am to witness the lunar eclipse. That is about two hours earlier than I’m apt to wake up/come alive, so I’m not sure how the morning will look. I’m quite sure, though, that it won’t be pretty.