Early this morning, at 7 am, my alarm rang to tell me it was time to wake up Charlotte, Neko’s friend who had slept over last night for Neko’s birthday party, to take her outside to see the lunar eclipse. I went outside to see if it was even visible, and on seeing that it was, wondered to myself what to do. If I woke up Charlotte, would it wake Neko? Would she be really overtired then? If Neko didn’t wake up, what would Charlotte do until she did? In the end I fell asleep for a bit, then woke up at 7:45 and when I went back outside to see if the eclipse was still visible, Charlotte woke up and came out to see. I’ve been a zombie today, though I guess it was cool to see the eclipse (I hate to sound like a brat… but I’ve seen about four now… and I wouldn’t normally get up at 7 am to see one).

After Charlotte had gone home, we drove up to my parents’ place in my hometown. There was a winter festival happening tonight in my hometown, and I’ve always wanted to take Neko to it. This is the first year it’s worked out. First, we had cake and gifts at my parents’ house, as it’s our niece’s birthday today. 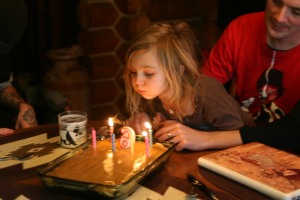 The festival had a hay ride, craft sale, free hot dogs and hot chocolate, skating, and Santa. The local shops were also open late. I ran into a few people I knew, which was neat (a couple of them I hadn’t seen since high school). 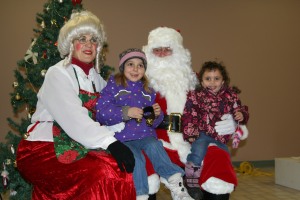 Neko finally got to see Santa and tell him what’s on her wish list!

I wore one of my favourite winter dresses, an organic cotton piece from a Vancouver designer. With tights and long wool underwear, a hat and mitts, and my Keen boots, I stayed warm outside for quite a while! Though, it’s also only about freezing, so quite warm. 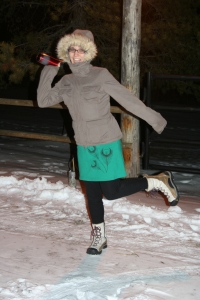 My parents have a lovely woodstove so afterward we took to the loft and watched the Doomsday Marathon on National Geographic. (And ate oranges.) 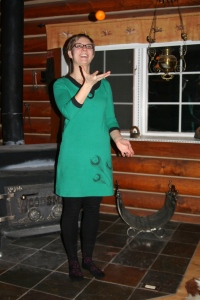